The long blast of cold weather has really tested our ingenuity and resourcefulness, but this month’s box is still a strong one. We have had to postpone the inclusion of Garlic Mustard until next month (or maybe later, depending on the length of this cold snap) to allow the plants to grow a bit more, but we have subbed in another great Winter herb that will still add some wild flare to your dinner! 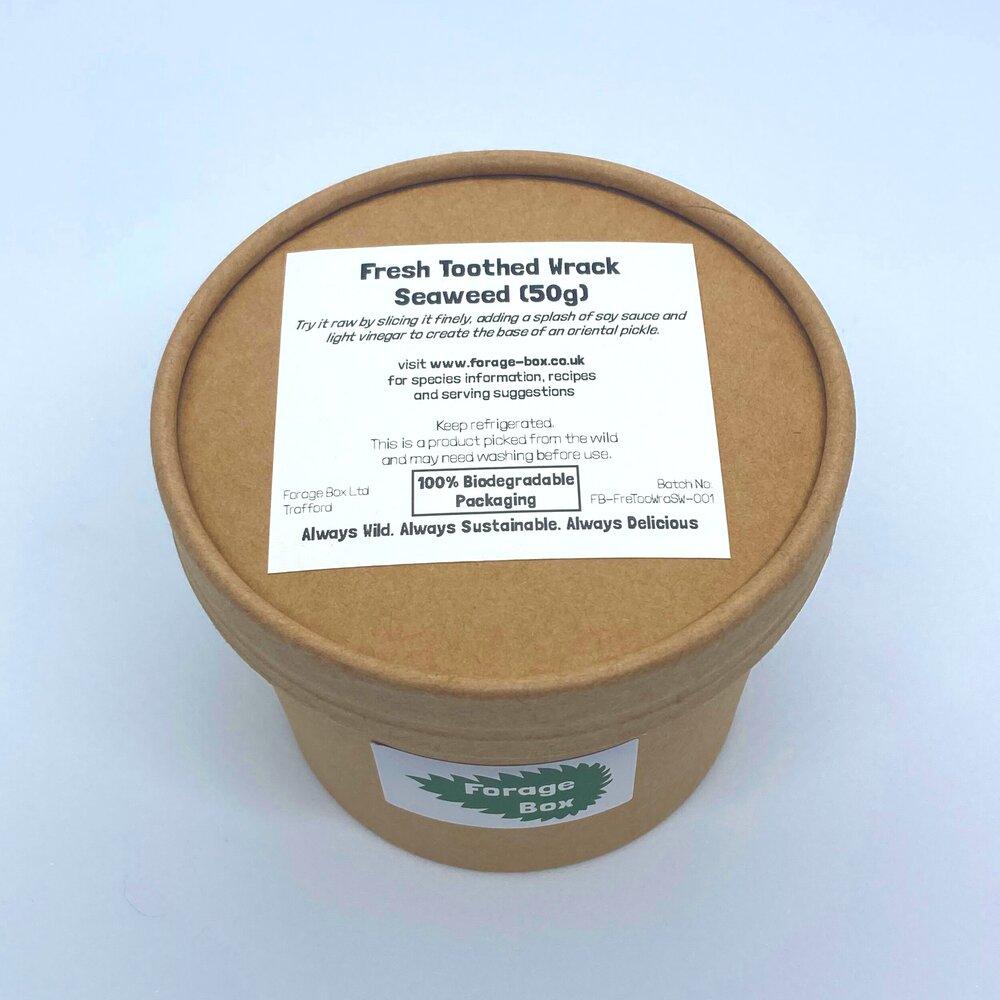 A first for Forage Box - we’ve never sent out a fresh seaweed before but we know it will be a hit. You may know all about the umami and salty qualities that seaweed offers us in oriental cuisines in particular, but a quick spot of internet research will provide you with a veritable Who’s Who of vitamins and minerals found in these beach dwellers, including ones that can quite often be missing from your standard fruit and veg. Thankfully, it’s not just a health kick that this month’s fresh seaweed offers up, but also the chance to experiment with the unique flavour profiles that are rarely found elsewhere.

Toothed wrack seaweed is a fairly common, locally abundant seaweed that clings to rocks in the mid-tidal range. Recognisable by its toothed edges and no apparent ‘bladders’, fronds should be trimmed from the plant (pulling seaweed straight from the rocks is a big no-no. Giving any plant the ability to grow back is a vital element of sustainable foraging) and can be nibbled right there on the shoreline. Yes, you can toss this in a stir fry, add it to soups and broths, or simply steam with some shellfish, but the satifying chewy bite that is to be had when enjoying it raw will be lost. Remember that kelp wine vinegar we sent out in December? Try sprinkling that over a raw salad of finely-sliced, raw toothed wrack, some red chilli, a healthy splash of soy sauce and perhaps some sesame seeds. You will be blown away by the flavour of such a simple dish. 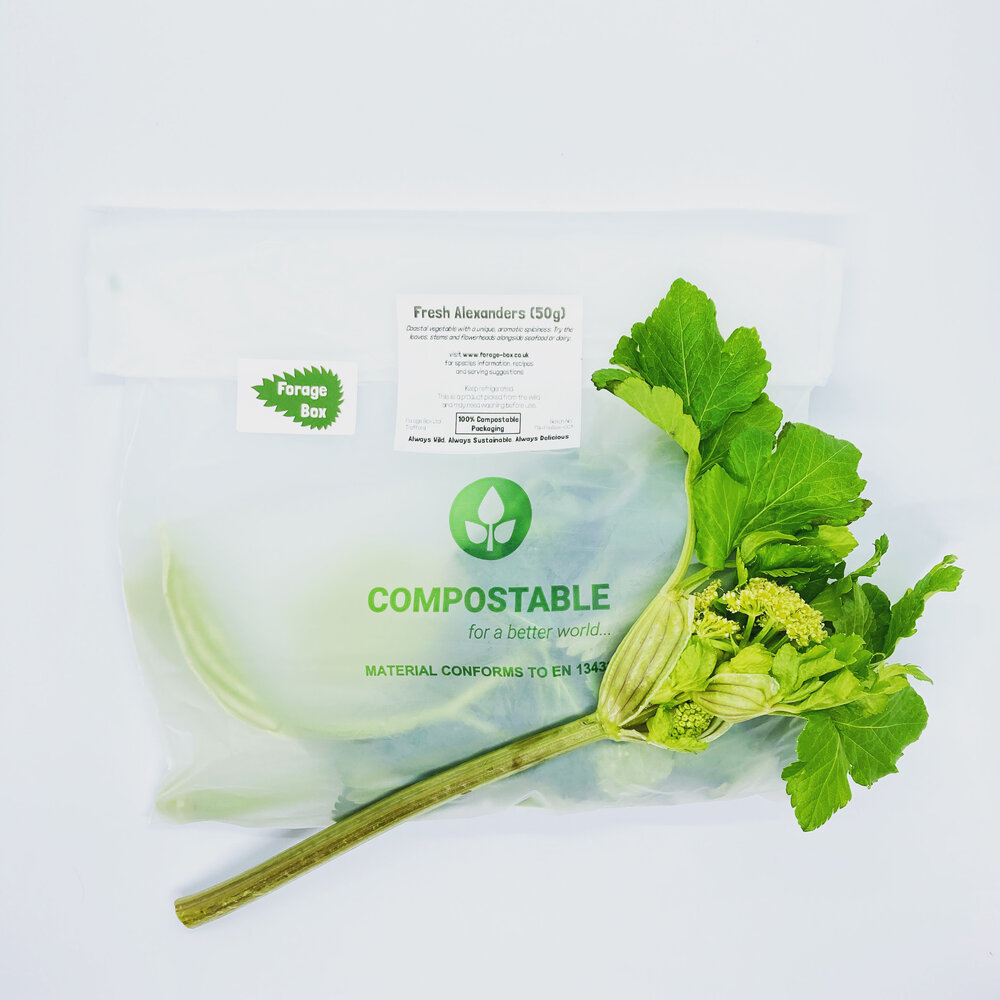 “What did the Romans ever do for us?”

Well, they decided to plant lots of herbs on our tiny little island, many of which have long since been lost from the allotment, but can still be found growing profusely in the wild. Two centuries after planting Alexanders to feed themselves through the colder months, this member of the wild carrot family (a potentially deadly bunch, so please be careful!) can be found nestled in hedgerows along coastal paths and seafronts. In its full form, it looks remarkably like a lot of other wild plants - some delicious, some dangerous - but the Winter growth tends to set it apart from being confused with most other species, barring the deadly Hemlock Water Dropwort*.

Later in the year, you can eat the stalks, flowers and eventually the seeds (watch this space), but we’ve sent out the leaves of the plant this month to be used as a herb - some of you may have even received flowerheads and stems, which are just as good to use. Flavour-wise, it has been described as spicy, pungent, perfumed, aromatic and apparently even tastes like myrrh (we cannot verify this) so is a versatile ingredient to have in your culinary arsenal. We enjoy it on sandwiches, as a garnish for curries or whizzed into a guacamole. Without question, though, our favourite way to really get to grips with this sophisticated herb, in what perhaps might be called an unsophisticated manner, is blitzed into a vodka and served alongside steamed crayfish. Dust off your food processor and simply drop in a handful of raw Alexanders leaves with however much vodka you are in the mood for, before passing the resultant liquid through a sieve. The result will be nothing like you’ve ever tasted before but will perfectly compliment the rich, floral sweetness of the crayfish. Sun not past the yardarm? You can substitute the vodka for water and create something they probably mess around with on those televised cooking competitions.

*Again, please be careful! Alexanders is not a beginner plant to identify! 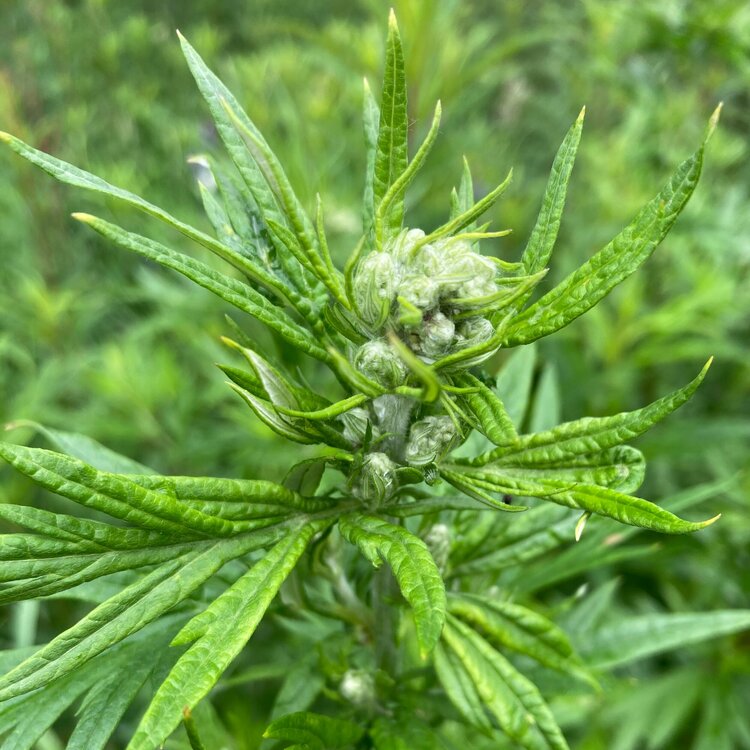 Die-hard Forage Box fans may already enjoyed the flowers of mugwort, which we sent out as a tea way back in August, and will recall its aromatic, herbal nature (as well as its effects on your sleep). This time round, it is the leaves we are focusing on as we look to add more to our spice rack. Mugwort itself is well out of season, but we picked what we could back in summer in preparation for these leaner months.

Despite being a prolific grower when the sun is out, we reckon mugwort is best suited to winter cooking - soups, stews, broths, roasts - and will sit comfortably wherever you might use sage, even if it is slightly more delicate in terms of flavour. If you’re feeling adventurous, try it in a Korean broth with udon noodles. If that all sounds a bit alien to you, a simple sage and onion stuffing can be made using the sage/mugwort substitution we mentioned earlier. 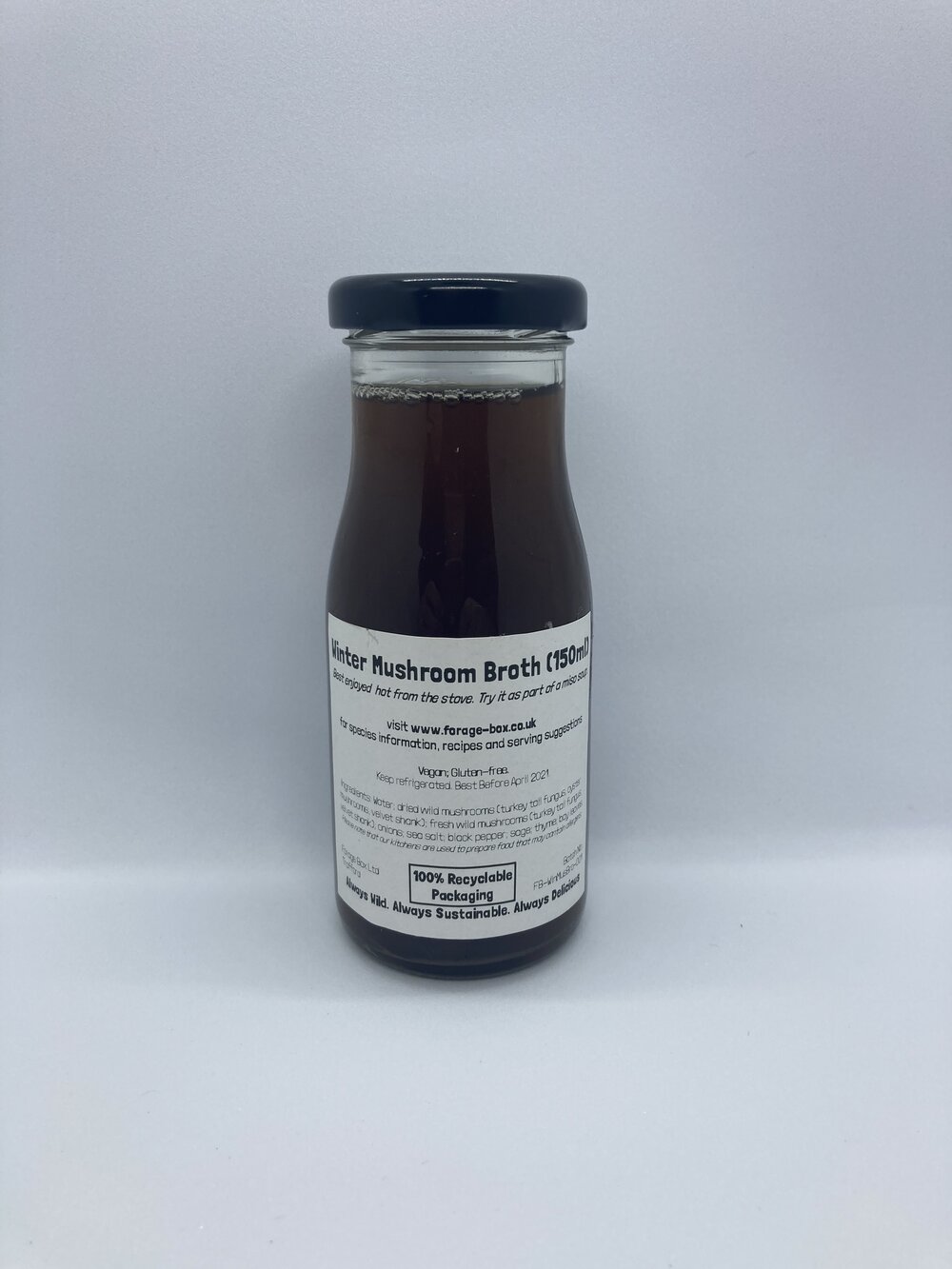 Other Names:
Turkeytail Fungus (pictured), Oyster Mushrooms, Velvet Shank
Season:
Best in wetter and colder seasons, but available all year round (Velvet Shanks are specifically found in Winter only)
Parts Used:
All
Origin:
Cheshire
Possibly confused with:
many species of mushroom - extra care must be taken when picking wild mushrooms
Produced by:
INSTAGRAMTWITTERFACEBOOK
Great alternative to:
other broths, ‘branded instant soups served in cups’
COMING TO MARKET SOONBUY SEPARATELY
INFO

Autumn is often seen to be both the start and end of the mushroom season, but that really isn’t the case. A wet walk through the woods in January will see you cross paths with plenty of wild fungi, some of which we have included in this warming mushroom stock. The three we have chosen to give a snapshot of cold-loving mushrooms are Turkey Tail Fungus, Velvet Shanks and Oyster Mushrooms. Oyster mushrooms need no introduction - you can find cultivated version in your local supermarket if you really must - but you may be less familiar with the other two. Velvet shanks love a frosty patch and grow profusely on dead or dying ash and elm trees. They have a firm stem and sticky cap, two characteristics that lend themselves to being enjoyed after a long simmer rather than a flash fry. Turkey tails, as their name suggests, have an appearance that is similar to - you guessed it - the tail feathers of turkeys. They are incredibly chewy and not really one for including whole in any dish, but incorporated into a stock or broth, they offer a classic mushroom flavour. That said, some literature suggests that you can chew them raw having just picked them off a log like some sort of woodland chewing gum, however we tend to reserve this exclusively for use as a party trick on one of our foraging courses.

You can enjoy this broth as part of another dish, by chucking a few sliced vegetables into the mix to make a perfectly enjoyable lunch. You could boil the kettle and serve it half-and-half with boiling water to make a hot drink. However, to enjoy this at its best, we recommend heating it on a stove until it is just starting to boil and then pouring it straight into your favourite mug - by serving it this way, you will keep the flavour at its maximum allowing you to savour those lovely fungi flavour profiles. A small spoonful of miso paste will tranform it to the next level still. 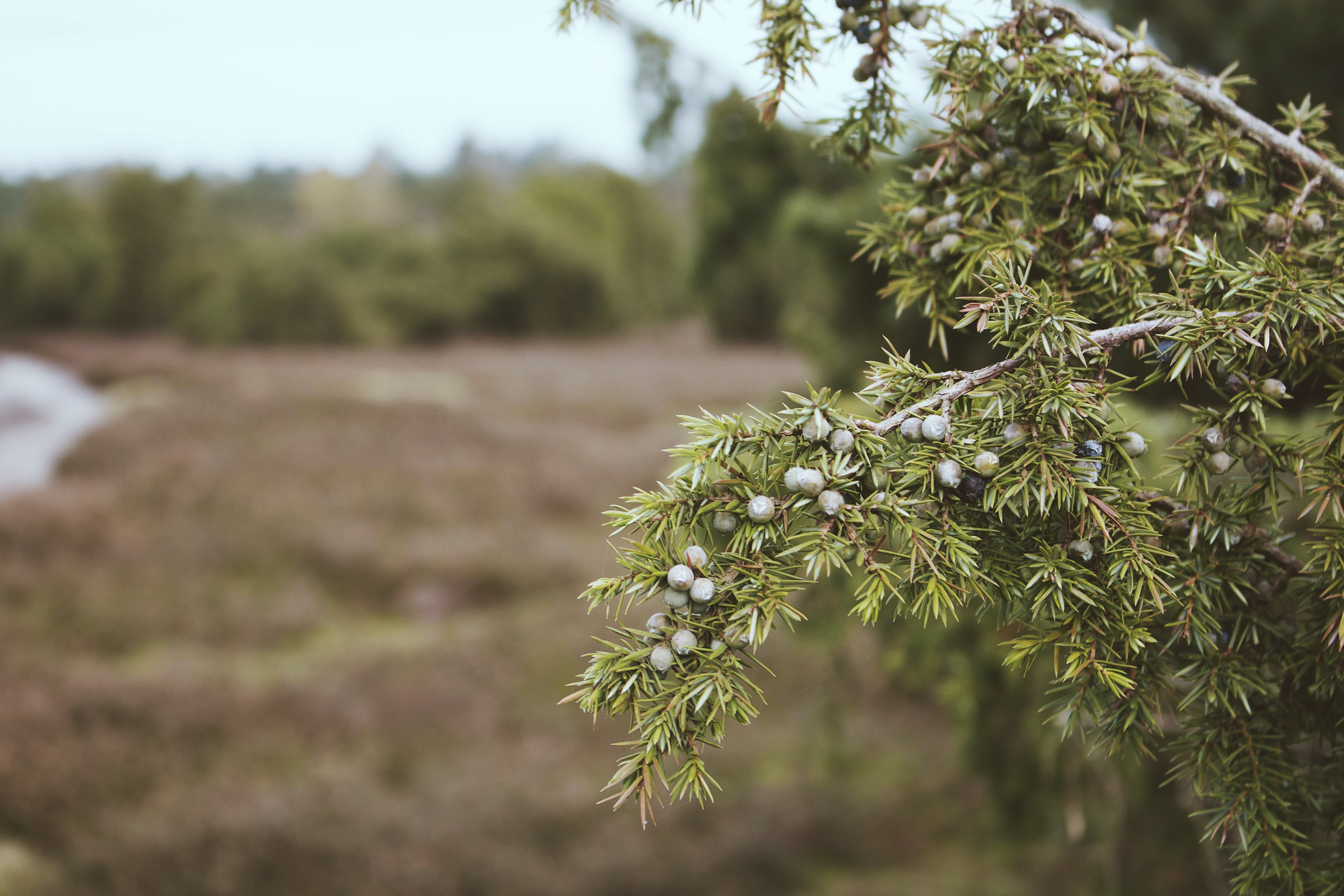 If you’re a fan of gin, you’ll have tasted juniper before. As the only compulsory botanical in the gin-distilling process, it will be a flavour you will be familiar with but may not be able to pick out of a line-up - it’s often muddled in with the likes of citrus peel, angelica and anise so can get lost in the mix. What we have here then, is an opportunity to isolate that fragrant spiciness through having combined it with sugar. As with the production of gin, we have included both the branches and berries to give a broader depth of flavour, which should allow you to make better decisions about where to use it in the kitchen.

You don’t have to stretch your ability too far with this one. Use a wedge of lemon or lime to moisten the rim of your G&T glass (before preparing your drink, not after!) and then run the rim through the this sugar. This is a classic way to garnish a cocktail and will compliment your aperitif beautifully. For a more meal-orientated serving suggestion, have a go at a simple curing process for salmon (it will work with other fish too but we reckon salmon or trout work best) or at part of a glaze for roasted root vegetables. Recipes for these are abundant on the internet and in many cookbooks - it is all down to your preferences and bravery as to which one you go for!

There are sometimes concerns surrounding the sustainability of picking wild juniper. We recognise this and before heading out to collect the small amount needed to put into your box, decided that we would ensure we planted common juniper trees (native to the UK) in areas that have seen a decline in recent years. In fact, for every branch tip that we neatly pruned off, we are planting one tree to more than make up for it. One landowner in The Lake District - an area with naturally occurring common juniper - was kind enough to let us prune the juniper in their hedgerow and we have since agreed to replant some of our new juniper trees on their land among other places. Our mission continues to be to ensure we have as little impact on the planet as we can, and this is one of the many ways we can ensure that.

READY TO TRY OUT
NEXT MONTH'S BOX?

Only £10.00 per month. Pause anytime!
“What a great idea! Forage Box has transformed our midweek meals!”

“What a great idea! Forage Box has transformed our midweek meals!”